I've taken the plunge I've been thinking about taking for a while now, and have re-established my blog on Wordpress.

This one will stay here for now, as there are lots of links in my previous posts that still link back to here, but I won't be posting any more new content for now.

So please come and visit me at pastpresentfuture's new home.

I hope to reconnect with you there.
Posted by sleepydwarf at 5:54 PM No comments:

Carrying on with the catch up theme, here are the next 4 days of 30 days of lists. 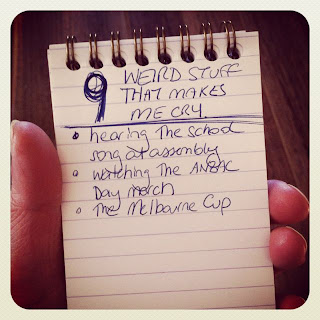 Someone asked me why the Melbourne Cup makes me cry. I know there is lots to dislike about the racing industry and most horses are not as lucky as these elite racers, but there is something that really moves me seeing these magnificent animals give their all in such a huge race. I loved watching Makybe Diva race and I think I cried every time she won.

Day 10: Meaningful gifts given or received. 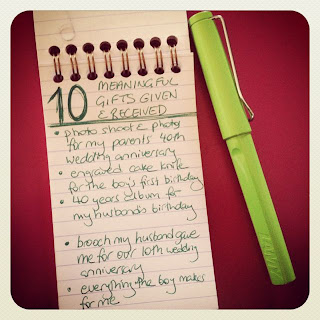 Day 11: This was meant to to be "things my family taught me" but I decided to make it more relevant to me now, and included my (work in progress) list of 12 commandments, as inspired by Gretchen Rubin's Happiness Project. 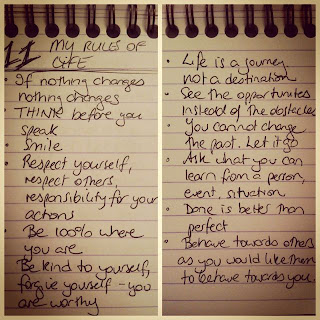 Day 12: Favourite things about this month - which could be this month to date, or this month in general. I guess I included a bit of both 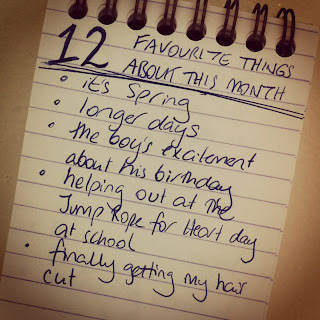 Thursday the 12th of September and Juniordwarf woke up very mopey, and said he didn't feel normal. We let him stay home and he rested most of the morning, and even had a couple of sleeps. We had soup for lunch and by mid-afternoon he was much better, which was lucky because we were going to take cupcakes to school on Friday for his birthday.

1 of 12 - One of Juniordwarf's jobs is to let the chooks out in the morning, collect the eggs and shut them up in the evening. Today letting them out became my job. 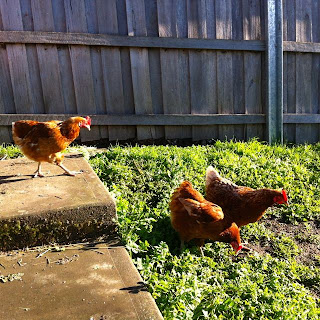 2 of 12 - It was cold this morning. I had to get the ice sheet out of one of the chooks' water dishes. 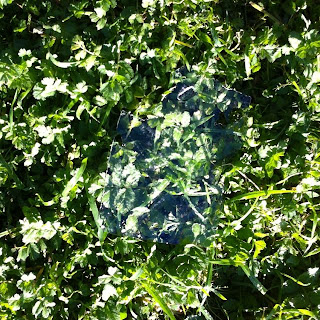 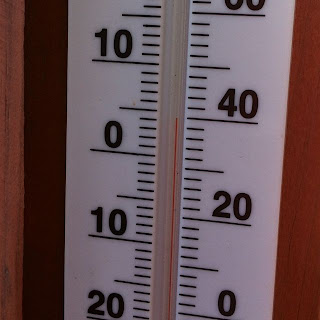 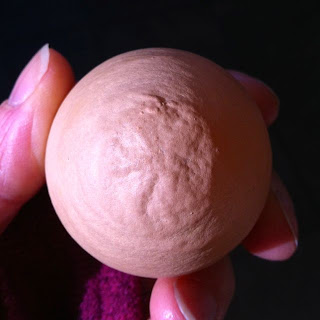 5 of 12 - The little boy in his dressing gown, asleep in Mum & Dad's bed. No light, hence the grainy photo. 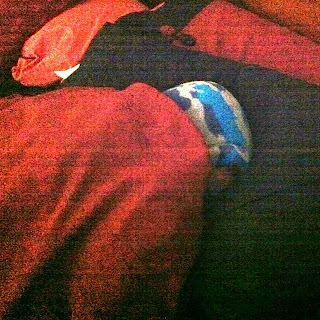 6 of 12 - I see these bright yellow flowers out of the kitchen window every morning. I have no idea what plant this is, but the flowers come before the leaves, so there is a sea of yellow outside. 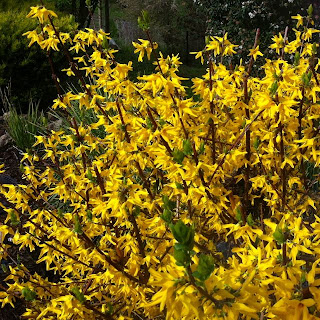 7 of 12 - An absolute disaster. I had "buy coffee" on my to-do list today. Luckily my local coffee shop sells beans, but I wasn't able to get there until after lunch when Juniordwarf was feeling better and we had to go out and get cupcake supplies. So I had to survive the morning with only two coffees. Unthinkable! 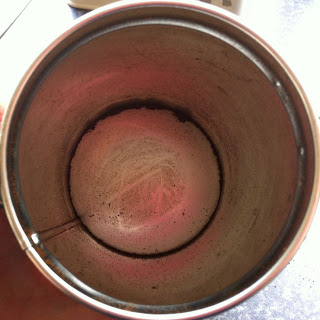 8 of 12 - By cupcake baking time Juniordwarf was much better. He definitely needed the rest. I'm not so sure about eating the drips of cake batter from the bench though. 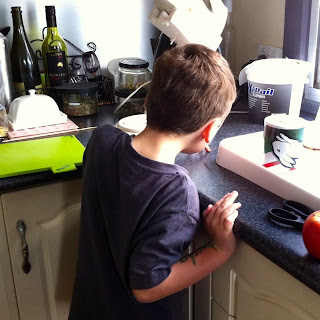 9 of 12 - Juniordwarf used to teach Teddy School for ages. Then earlier this year, Teddy School stopped. But it's going to start again this weekend. There will only be six teddies at school (because that's the number of hooks he has behind his bedroom door). There are five hooks already allocated: Billy Noisy, Kangaroo Cook, Dan, Pete and Zoe. The other one is reserved for James, who is Danielle's (the teddies' mother) new baby, born after the teddies' father Winston died. (James looks exactly like Winston - would you believe it.) It doesn't matter that babies can't actually talk and don't go to school. The other teddies will look after him. 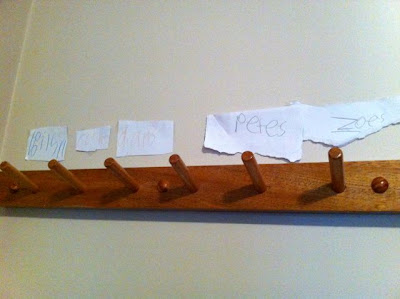 10 of 12 - Cupcakes. Experiments with various mixes of flours and sugars (and possibly lacking some baking soda in some cases). 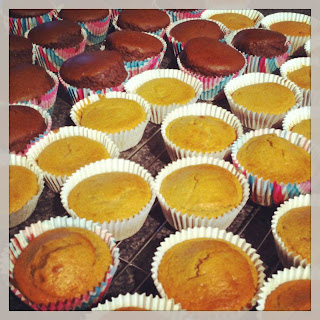 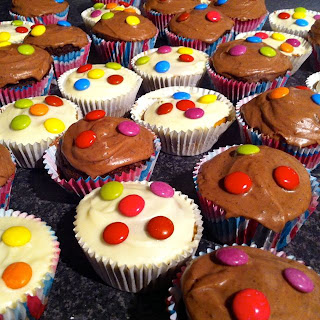 12 of 12 - It's getting late and I'm running out of ideas for photos. I've fallen in love with leggings lately. These are from one of my favourite stores, Keshet, in Hobart. They might or might not know me by name in there now. 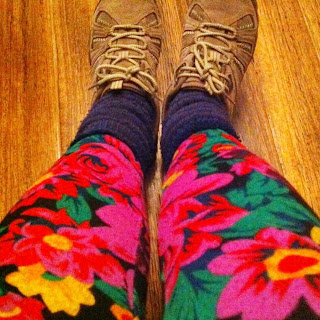 Posted by sleepydwarf at 8:53 PM 5 comments:

Email ThisBlogThis!Share to TwitterShare to FacebookShare to Pinterest
Labels: 12 of 12, present

A lot has been happening, so the next few days will be catchup posts.

To start with, here are the next four lists for my 30 days of lists project. (Days 1-4 are here). I'm having fun with this challenge, even though I've dropped a few days behind.

Day 5: Things I tend to worry about: 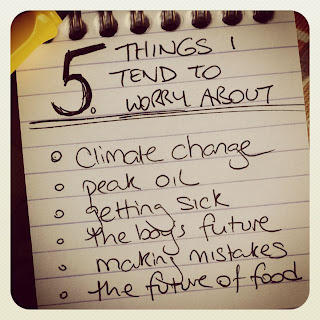 I tend to worry big. There wasn't enough space to fit in all the small stuff . . . As for making mistakes, I think I have to re-read my own post on the subject several times. One day it might sink in. 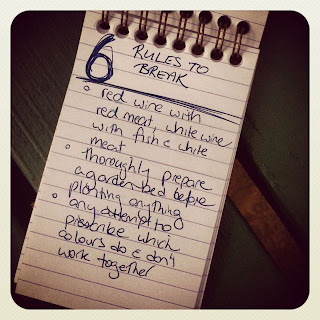 This one was hard. I'm not very good at breaking rules. But I thought of another one to break: "Keep up to date with the challenges". 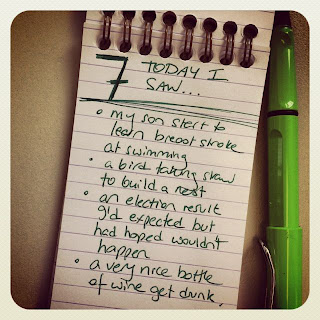 Day 8: I changed this one to suit me (that's one of the great things about this challenge - if you don't like the prompts you can change them). It was originally "childhood chores", but I though it would be more interesting to make it more current, so it has become "Saturday chores": 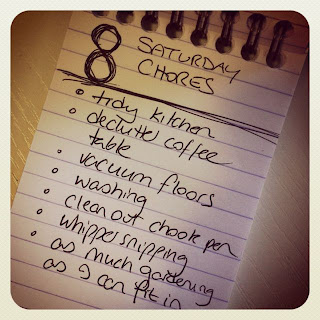 Posted by sleepydwarf at 8:02 AM No comments:

I recently heard about 30 Days of Lists and decided that it might be fun to join in.

It's a 30 day journalling challenge, where you get a prompt for a list every day, that you can record in any way you like. It could be as simple as writing each list down on the back of an envelope or as complicated and arty as you want to make it.

There are no rules, and you can even change the prompts if you don't like them. There's an online community to join if you want to chat to other listers, you can post your lists on your blog or do whatever you want with them.

And what you end up with is a nice little snapshot of your life in lists.

I didn't want to make it too complicated for myself, so I decided to use my Clairefontaine mini-reporter pad, which has lovely thick lined paper, perfect for my growing collection of Lamy Safari rollerball pens. (Many thanks to my lovely family for buying these for me for Xmas.) 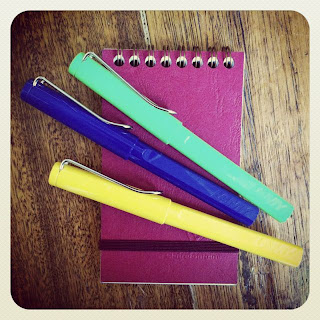 I came in a couple of days after the challenge started, so I'm a couple of days behind. I've been posting my photos on Instagram (using #30lists) and am going to post them here every few days. 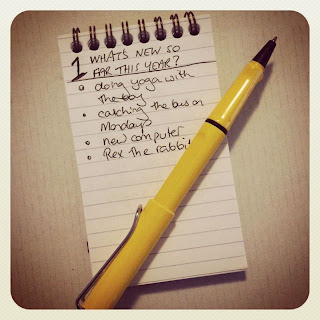 Day 1: What's new so far this year. This one's pretty self explanatory. 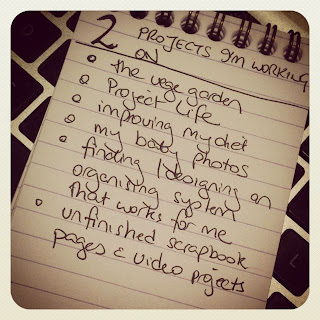 Day 2: Projects I'm working on. Basically some of the things from my 100 things to do list that are on my to-do list right now. 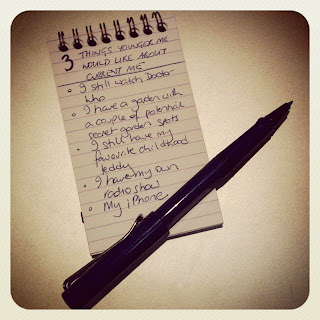 Day 3: Things younger me would like about current me. 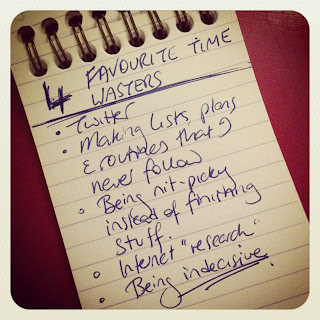 Funny that one of the things on this list is "making lists" . . .

And as for being nit-picky and not finishing things - I'm forcing myself to not make these lists perfect, and to do one each day so that I do get them done, rather than think about it and decide I can't do it because I don't know what to write.

So the election is over.

We’ll have a new Prime Minister, leading a party that for the most part has policies and philosophies that I’m very much opposed to, and the thought of these people being in power for the next three years scares me.

To be honest, there was a lot to dislike about the previous government too, but I think they were mostly taking steps in the correct direction (with some very notable exceptions). Yet they managed to rip themselves apart and turn voters off in droves. Certain elements of the media didn’t really help their cause either.

I hope that they use this result as a chance to re-group, rebuild and come back as a united, genuinely alternative party to the government-elect.

The election is over and done with and I have to live with the result. There’s nothing I can do about it.

So I decided to look at it like this. I have two choices. I can get angry and complain about how much I despise the incoming PM and focus on all the things I dislike about him and his party, which is tempting because I do like to complain. (And I’m not going to kid myself that I’m never going to say a negative word about him over the coming three years.)

Or I can take the disappointment, anger and disgust that I feel and channel it into fighting back and standing up for what I believe in. Turn it into something positive. Find ways that I can make a difference.

Right now I don’t know what form any of this will or can take.

I haven’t thought much beyond my initial realisation that there are options other than feeling down about it - which came as something as a shock to me, because I expected to be feeling totally miserable today. This is the first time in my life an election result has made me feel strongly about actually doing something to try and make a difference, and that feels kind of good.

So while the election didn’t go the way I would have preferred, I’m going to look for things that I can do that will help me express my disappointment and disagreement in positive and constructive ways. And if I can do this, then in some way, the election will have had a good outcome for me.

Onward and upward. And maintain the rage.

On the occasions I actually sit down and do some scrapbooking, I've been going back to some old photos and making some fairly simple layouts just to get the pictures out of the box and into the album.

Here's one I finished recently. It's a double layout from the 2007 Hamilton Show.

I used some old Kaisercraft papers for this layout. I had some papers from this collection ("Party Animals") in my stash, but not the one I wanted, so I had to dig through a rather huge pile of papers that no one wants any more at the scrapbooking shop to find it. The alphas are also by Kaisercraft, coloured with a combination of paints that I mixed for ages and still didn't quite get to match the paper.

Posted by sleepydwarf at 9:49 PM 4 comments: