You might remember this post from about six months ago, where I told the story of losing Juniordwarf's teddy Chocolate-the-Girl (AKA Zoe).

Just recently, Chocolate has now taken on her real name of Zoe. In fact, she's always been Zoe, according to Juniordwarf. Chocolate is her nickname.

One Sunday late last year Juniordwarf informed us that Zoe would be leaving school (this is the class of teddies that Juniordwarf "teaches" in every free moment he has) and. at the ripe old age of six, would be opening a shop. She would spend Monday at work with me for the last time, on Tuesday she would be at our house setting up the shop and cooking the food, and the shop would open on Wednesday.

And from Wednesday, our house wasn't going to be a house any more. It was going to be Zoe's shop. Yep, we were pretty excited that our new house was going to be taken over by a small orange muppet. However, we were assured we would be able to continue to be here. How considerate!

The shop would be called Zoe's Kitchen and was going to have pretty much everything you could imagine, including a huge pie warmer for the party pies and sausage rolls.

He told us that the shop was going to be open every day, bascially from the time he got up to the time I went to bed at night. (It would be my job to take Zoe to bed each night, as the shop would be open later than Juniordwarf's bed time.) I asked him when Zoe was going to do all the cooking, after the first day of cooking and preparing, to restock the shop once the food started to be sold, but he didn't quite get the idea that things would run out if you sold them all.

Anyway true to his word, he set Zoe up in her shop first thing on the Wednesday, and ever since then she has been sitting in her shop until it's time for bed. She hasn't had a single day off. 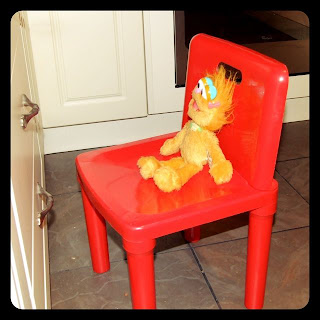 That is, until Wednesday, when we went camping. Juniordwarf said that Zoe was going to come with us, and one of the other teddies was installed in Zoe's Kitchen.

As soon as Juniordwarf's tent was set up, he put Zoe inside and said that her shop was now in his tent. Including the pie warmer, apparently. I'm not sure what that left in the shop at home though. And it's not much of a holiday for poor Zoe.

Well, she did get a break. We went for a couple of walks in the national park, and Juniordwarf insisted on bringing Zoe with us. That was fine until she, er, went for a swim off the bridge.

I didn't see what happened, but Slabs said that Juniordwarf was dangling Zoe over the edge of the bridge and let go.

He was, as you can imagine, distraught, and my first instinct was to step into the creek to pull her out. Only the creek bed was something not dissimilar to quicksand* and I had to get out before I sank. Hello filthy, soaking wet shoes.

Calmer heads prevailed and we waited for her to float slightly closer. A combination of very careful creek walking and a long stick saw Zoe rescued and returned to a grateful Juniordwarf. Afterwards Slabs said it would probably have been easier to fish her out from the bridge, which, in hindisght is probably true.

Anyway the teddy was safe and no harm was done.

There are no photos of the actual incident (and thankfully none of my near immersion in the creek), so here are two after-the-event pictures. Juniordwarf's version and mine:

Despite all that, we did have a fun camping trip and we saw some very cool trees, but that's another post.